As we are all now fully aware, many of the Islands, from the US Virgin Islands all the way through Cuba were recently devastated by Hurricane Maria.  The relief has been very slow coming and many places on these Islands are still currently without power, nearly three weeks after the Hurricane blew through, but this story is not about the devastation, it’s about the power of people and how our efforts can help with Hurricane Disaster Relief.

I’m sure that many of you, like me, always wonder how we may help when a natural disaster occurs, where so many people, our brothers and sisters, family members, friends and strangers are all affected by these terrible storms.  I have donated to many a disaster relief fund, hoping that my donation will go to help those in need and not feed the bureaucracy that runs the machine.

Well, recently I had the opportunity to know, that my efforts actually went to those in need in Puerto Rico.  My son is married to a woman whose mother and brother were living in Puerto Rico.  They didn’t have much, but they were comfortable and happy, and then Maria blew in.  Puerto Rico’s power grids were completely destroyed, homes, factories and hotels were destroyed or at best, damaged. 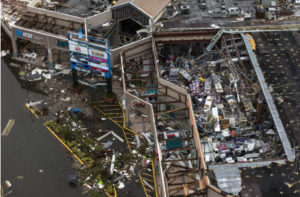 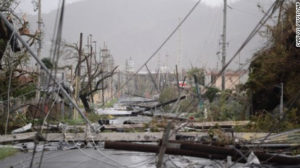 We now know that food became short in supply as did water, medical supplies, baby food, and fuel, and relief efforts were excruciatingly slow.  Some had been fortunate and had generators, run by fuel, that could help them in their time of need, but many were not so fortunate, and cell service for the 3.4 million people on the Island became extremely difficult as no one could charge their phones. It was estimated that less than 200,000 people were able to keep some charge in their phones, which allowed them to let their families and friends know that they were alright, for the rest of the population, no one heard any news.

Fortunately for my son’s family, his brother-in-law worked for a radio station, with generator power, and they allowed their staff to keep a small charge in their cell phones, so we had some contact, although only intermittent, and via text only, so as not to burn up the small charge that he had in his phone. This allowed us to formulate our plan to help him leave the Island, and bring him and his mother to the mainland for safety and comfort.

We began our efforts by first attempting to book a commercial flight off of the Island.  They could not afford the two tickets, but we felt that it was important to keep them safe, so we paid for the tickets for them, yet after multiple efforts, the flights were not flying in or out of San Juan.  One flight after another was cancelled.  The devastation was too great to make flying into Puerto Rico safe. We then attempted to charter a boat to reach the Island to help evacuate family, and anyone else that we could bring to safety.  This too proved to be a daunting and outrageously expensive task. 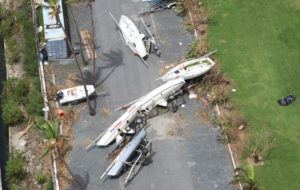 Finally, my son decided to charter a private plane to fly into San Juan to pick up his family, and bring them back to Florida.  Now, as we are all quite aware, chartering a private plane is fantastically expensive for most people, but my son reached into his life’s savings, to help his family.  After he booked the flight, for 8 people, he attempted to sell some of the seats to mitigate this tremendous expense, but no one could reach their loved ones to discuss it.  We reached out via Facebook, asking if anyone knew of family or friends that wanted to leave the Island, and many people responded, but without cell service, it was impossible to confirm the possibility.  We had one person tell us that they had family in Puerto Rico, and that one relative had run out of Insulin, and was there any way that we could help bring the medication to them on our flight?  I called a cousin of mine that is a medical doctor, and unbeknown to me, he was on vacation out of the country.  I awakened him at 3am to discuss this, and he willingly offered to call his partner in the states to see what he could arrange, but, he needed to know exactly the dosages and supplies needed. After many attempts to reach the family in Puerto Rico, with the cell phones inoperable, we were not able to obtain the necessary information to send the medication. We had it all arranged, but were unable to help this family, the devastation was too great an obstacle to overcome.

We were able to arrange for the outbound flight, which would be empty except for the pilot to be filled with as much supplies as we could fit.  At least we thought we would be able to send in supplies to those in need.  We found people to donate the supplies and all was ready to go, and then it hit, the flight could not get clearance to leave the ground. We thought our efforts had failed. 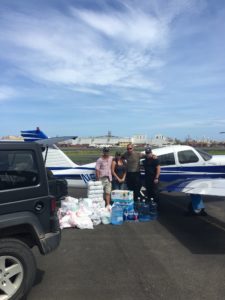 After 3 more days, we attempted another boat charter, but after being quoted $380,000 to charter the boat, we went back to the private plane idea, and we found a plane that was able to obtain clearance to fly into San Juan. Still quite expensive, but only a 4 passenger plane this time, we chartered the flight.  We filled the plane with 700 pounds of supplies, baby food, diapers, large jugs of water, smaller bottled water, food, and medical supplies and off the flight went.  The flight flew from Miami to the Dominican Republic, which was also hit hard by Hurricane Maria.  Our pilot had to wait 4 ½ hours just to re-fuel the plane, and then had to remain over night in Santiago, before continuing on to San Juan. 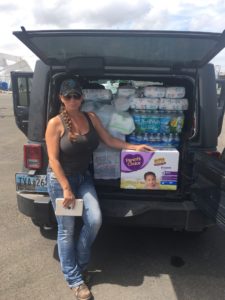 We connected with a wonderful volunteer doctor that was in San Juan, and she was able to arrange for a truck and fuel to meet the flight and receive the supplies that we sent down.  This doctor personally took the supplies and distributed them in a small village on the Island, where the children and families had not had food or water for 2 or 3 days.  Our effort truly helped to save lives.  These people that were so devastated by the Hurricane were able to receive some relief because of our efforts.  I know that my help and my son’s help went to the right place.

The relief effort worked so well that we attempted a second run at it!  We chartered another flight, and the charter company this time donated the flight and pilot, with a larger plane.  We were able to bring four volunteer workers on the next flight to San Juan, and we were able to again obtain food, water, and medical supplies that were donated to help those in need in Puerto Rico.  What a tremendous feeling of satisfaction I had, knowing that my son’s effort and my efforts were able to help others that were so desperately in need.

Our quest to help continues.