WHAT’S THE STORY WITH FLUORESCENCE

Have you ever noticed the term “Fluorescence” on a GIA, (Gemological Institute of America) diamond grading report? Has anyone ever told you that it was right for you to purchase or not to purchase a diamond with fluorescence?  What’s the story with Fluorescence?  Did you know that some, but not all, diamonds show effects under ultraviolet light?  What does it mean to you?  Aaaahhhhhh!!   Well, here are the straight facts about fluorescence for you to consider, and then you may make an educated decision on what truly is right for you.

For most people who purchase a diamond, fluorescence will be a non-issue, but some might be confused by the term.  Below are commonly asked questions, and helpful answers from GIA researchers who have studied fluorescence in depth.

What is diamond fluorescence?

Diamond fluorescence, in its most simple form, is the effect that ultraviolet (UV) light has on a diamond. When you place a diamond under a black light (long-wave UV), some diamonds will glow, at varying rates of intensity, similar to what you may see when a black light poster has been exposed to a black light. Fluorescence is the visible light that a diamond emits when it is exposed to the UV rays, and the light will last as long as that diamond is exposed to the Ultra violet source. Long-wave ultraviolet light is an essential component of natural daylight. Most of the time in diamonds the this color is blue, but on rare occasions it may be yellow, or even white! 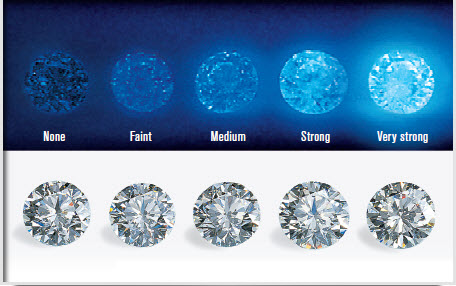 Is Fluorescence in a diamond common?

Yes! Of the diamonds submitted to the GIA over the past decade, approximately 25% – 35% exhibit some degree of fluorescence. However, only 10% of those show strengths of fluorescence that may affect appearance in the diamond (ie; strengths noted on a laboratory report as medium, strong or very strong).  This means that less than 3.5% of all diamonds have a potential visible effect, but, in most instances, the visual effect is negligible.

What Impact does Fluorescence have on the appearance of a diamond?

GIA studies show that for the overwhelming majority of diamonds, “the strength of the fluorescence has no widely noticeable effect on appearance”. In the GIA Fluorescence Study, it was found that the average person could not make a distinction between a diamond with fluorescence and a diamond without fluorescence.

“In many instances, observers prefer the appearance of diamonds that have medium to strong fluorescence”

according to the GIA report.

Less than 0.2% of diamonds that exhibit fluorescence may appear hazy or oily, which may affect the appearance of the diamond, but this is obviously extremely rare, less than 1 diamond per thousand! Most people actually like the appearance of some fluorescence because in natural daylight, the diamonds may appear whiter than the true body color of the diamond, which many find a bonus.  As blue is the complementary color to yellow, the most common tinted color in diamonds, the presence of blue fluorescence can make yellowish diamonds look white or colorless.

So how do you feel about fluorescence?   Let us know!