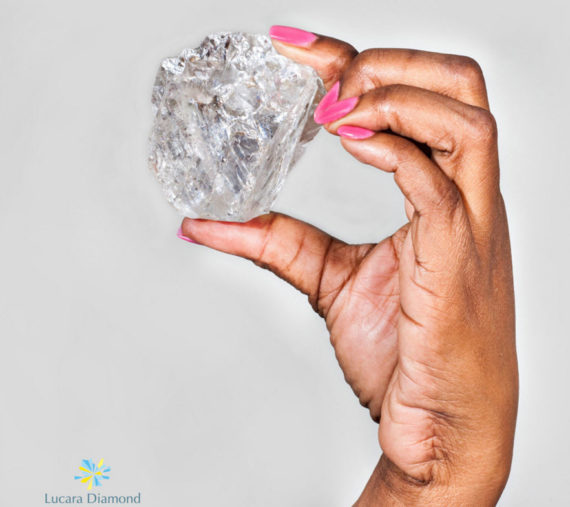 This diamond was put up for auction as a rough diamond, a very unusual move as in the past, typically only cut and polished diamonds have been submitted for this type of auction.

Rare finds like this are usually only offered to an elite group of dealers who assess the gem to determine how many individual diamonds can be cut from it before it is sold.

Opting to auction the stone whole was an attempt to tap a new market of wealthy collectors eyeing trophy stones. The auction, Lucara CEO William Lamb told Reuters, was an opportunity to “access to as many ultra-high net worth individuals as possible, those people who had bought very expensive items in the past.” Sotheby’s would have made a 12% fee from the sale, the New York Times reported.

The approach apparently was not successful as the bid failed to reach the reserve amount for the Lesedi Diamond.  The highest bid was only $61 million dollars, but the expected sale amount was $70 million! William Lamb says that’s just fine. “There is definitely demand for the stone. It is just demand from the people who we would normally sell the stone to.”

In May, the Lucara Diamond Corporation sold the second-largest rough diamond, the 813-carat Constellation, for a record-breaking $63 million. That sale, to a Dubai-based rough diamond trading company, fueled speculation on how much the Lesedi La Rona diamond would fetch.  Applying the same dollar-per-carat price, would have valued the Lesedi La Rona at $86 million!!